My interest in photography started when I was a little boy and received a small Kodak Instamatic camera for my birthday.

The images I captured then were meant to retain memories: snapshots of the Cape sea, the Transkei coast and the fish we caught, the Kruger National Park – places my parents regularly took us children to for holidays. And landscapes too, en route to our destination, or back home: the Karoo, the green hills, the Lowveld. Somehow I almost instinctively fell in love with these “wild, open spaces”.

In my late twenties – roundabout 1983 – I had the opportunity to set up my first darkroom where I could develop and print my own black-and-white films. I wrote the name of the room on a piece of plank and nailed it to the entrance door: De donkere kamer van Damokles, after the novel of the Dutch author W.F. Hermans.

For the next 12-15 years there was no question of colour in my work. I learnt to see colour in different grades of grey: yellow was light grey, a blue sky white, red dark grey, sometimes black, green neutral, except in the shadows when it had a propensity – like red and brown – towards black.

At the time I eagerly worked through all photography books I could lay my hands on and acquired various darkroom skills on my own. Photographers whose work I admired included all the well-known names, like Ansel Adams, Henri Cartier-Bresson and Man Ray. The latter two started their careers in the visual arts and Ray especially will probably be remembered as a painter rather than a photographer. But the coalescence of art and photography – a process later almost perfected by a photographer like Sam Haskins – was exactly that which tickled my fancy.

Thanks to the advent of digital photography and its concomitant revolutionising of printing photos on paper and canvas, I looked on, almost as a bystander, how my register of themes expanded spontaneously. Suddenly all forms of photography – from micro to macro level – were possible within an average or even below-average budget, and I could effortlessly broaden my interest in especially nature and wildlife photography.

However, to leave the human body as imagined art object behind - either in its natural form or constrained - is well-neigh impossible. The eye seeks and finds firstly something recognisable, but when the “known” clashes with the “new”, tension develops - an integral part of any artwork, whether it be music, literature or the visual arts. Unconsciously I try in my work – in its own right a game of light and lines – to unleash some of this tension.

The appearance of the software programme Adobe Photoshop in the 1990s was generally greeted with delight by both amateur and professional photographers. At the time I was employed as photojournalist and the easy manipulation of photos thanks to Photoshop – for example the cutting out of figures and moving them about or slipping in new ones from other photos – immediately gave rise to ethical questions. One could hardly manipulate a news photograph and dish it up to readers as the truth or reality. There and then I decided to cut Photoshop at least out of my life – a decision that still holds sway . The only changes, if any, I bring about on my photographs, are those that were traditionally possible in a darkroom, for example cropping or the lightening or darkening of an image. Furthermore I do not use flash light, studio lights or filters. Sunlight, or the lack of it, does it for me. 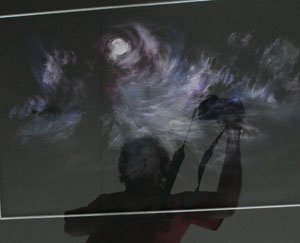